Ever Lower Rates Bring out the Serial Refinancers 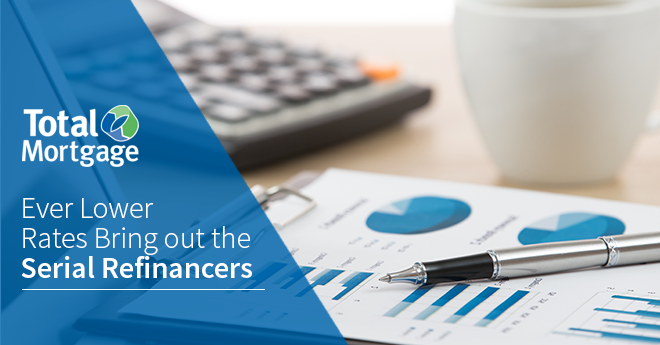 Brexit, the British decision to leave the European Union, is the latest unexpected event that’s driving down mortgage interest rates as investors flee Great Britain and European markets for the safety of US Treasury bonds and mortgage-backed securities. Europe’s dilemma is a boon for American homeowners as the uncertainty in Europe took raising rates off the Federal Reserve’s agenda for the next quarter.

Once again, rates are approaching near record lows, creating new opportunities for homeowners to refinance.

How homeowners have reacted to rate drops

Many of the new refinancers have already refinanced recently. These “serial refinancers” are willing to pay the origination and closing costs involved getting a lower rate. A recent study by Black Knight Financial Services found that serial refinancers played a significant role in the rise and fall of refinancing volumes throughout 2015 driven by interest rate fluctuations.

During the housing peak from 2005 to 2006 nearly all refinance volume was coming from borrowers who held their prior mortgage for less than four years, Black Knight reported.

“Term reductions remain popular among borrowers taking advantage of low rates; not surprisingly they are more popular among more aged loans, as borrowers do not want to restart the clock on their mortgage,” the report said.

However, serial refinancing can be a losing proposition.

What does that mean for you?

“If your time horizon is not long enough, you are not going to be able to recoup the cost of refinancing,” said Greg McBride, senior financial analyst for Bankrate.com.

Even those who roll closing costs into the new loan can end up on the short end of the stick. McBride says consumers who continually raid the piggy bank to pay for such costs should think twice before opting for another refinance since they are increasing their balance with each refinances as opposed to knocking it down.