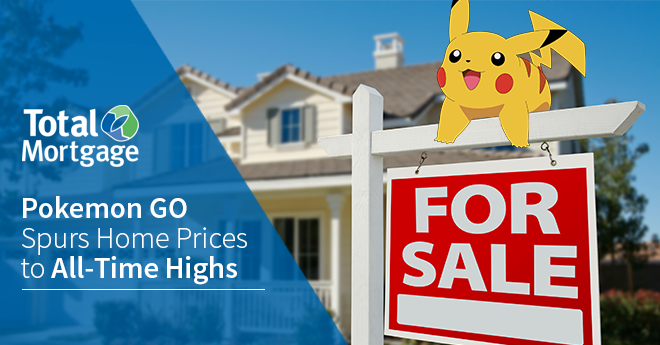 Okay, not really. But there is some reason to believe Pokémon GO—the mobile app game that is currently taking the world by storm—could potentially influence home prices.

For the uninitiated, Pokémon GO is an augmented reality game that you play on your smartphone. It uses your phone’s time tracking, camera, and location functionalities to create a pokémon world that you can travel through in real life. Just like the originals, you can try to catch em’ all, or you can train your Pokémon and battle at local gyms.

Where do home prices come in?

On your path toward becoming a Pokémon master, there are a few key locations that you have to visit: Poké Stops and gyms.

Poké Stops are where Pokémon trainers check in to gather items that will help evolve their Pokémon. These blue circular signs are tied to real world locations like stores and landmarks.

They don’t just pop up everywhere, though. Some rural areas are entirely lacking Poké Stops, while other places are teeming with them. Because they are integral to growing your Pokémon, users have been flocking to areas that are densely populated by Poké Stops. The demand has caused some in the real estate industry to speculate that homes located in close proximity to a swath of Poké Stops might be a new selling point to prospective buyers. If the demand reaches a high enough volume, it’s possible home prices could go up. 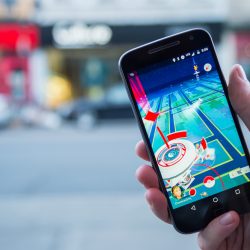 Pokémon gyms are the best place to train and level up your Pokémon. Like Poké Stops, they are also pinned to real world locations. As the premier destination for trainers, not having to travel far to reach one is ideal.

A location surrounded by Poké Stops is one thing, but if you live right next to a gym—or your house is a gym—you have the best shot at making some green off the pokémadness.

Boon Sheridan and his wife, who live in a restored church in Massachusetts, have had the good fortune of their home being labeled a gym. Many churches have been designated as gyms and it seems that the developers of the game failed to check if any of them were occupied. Users have to stay within a certain distance of the gym (Boon’s home) to be granted access, and therefore hang around outside his house at seemingly all hours of the day.

At present, Boon seems to be the only person with a house as a Pokémon gym, but there are no doubt countless residences that are located adjacent to, or very close to, a gym. Video games are famous for their eccentric fans, and it’s not unfathomable to think that some would long to live in a home right next to their favorite Pokémon gym.

Demographics and Number of Users

Clearly, there is a demand by some to be near Poké Stops and Pokémon gyms, but what are the actual numbers? According to recent data from research firm SensorTower, Pokémon GO has topped 21 million daily active users. That’s more than any other mobile game and it’s only been out for one week! It even has more daily active users than Twitter. As for engagement, Pokémon GO outperforms the seemingly unsurpassable Facebook.

Granted, in a nation of over 300 million people, 21 million is a fairly small percentage. There has also been some speculation that most users aren’t of a home-buying age, and therefore home prices wouldn’t rise since the Pokémon benefits would no longer be marketable.

While we don’t have any hard numbers on age demographics yet, anecdotal evidence and deductive reasoning, lead to the conclusion that many users are in fact of a home buying age.

A quick walk down to the local beach (a popular Pokémon hunting ground) after work revealed that the majority of users were roughly 18-30 years old. The lower end of that spectrum might not be ready for homeownership, but the upper end certainly is.

It makes sense when you consider that the most popular Pokémon series (red/blue/yellow) came out in 1996. The majority of kids who dove headfirst into the Pokémon world (millennials) are now in their twenties, and will be prospective homebuyers soon enough if they aren’t already.

Will the hype last? No one knows. It’s a game, albeit a wildly popular right now. It could burn out, but it could also be here to stay, and as augmented reality technology gets more and more sophisticated, we could be dealing with other games that could potentially affect real estate markets. All I can say is that I wouldn’t sell my home right now if it was a Pokémon gym, but I also wouldn’t invest in any Pokémon hyped property.