How to Avoid Being House-Poor 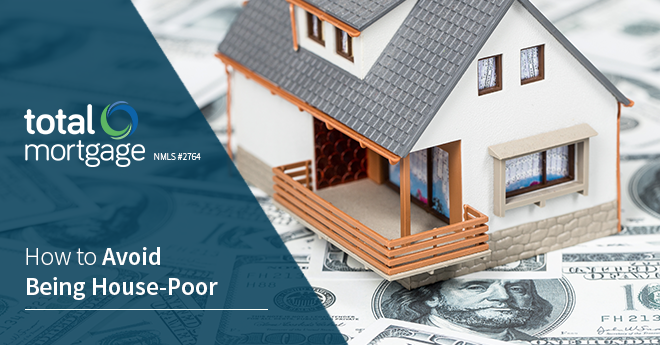 You may have heard the phrase “house-poor” thrown around before. Maybe a friend just closed on a house or a coworker has started warning you off homeownership, or maybe you yourself are feeling a little pinched.

Being house-poor sounds like a joke, or at least an oxymoron, but the reality is that it describes almost half of all American households.

On the outside, everything looks fine. They have a good job, own a house, a car, a new TV, but in reality they’re still living paycheck to paycheck, one major mishap from financial disaster. Despite the steady income, they are, in essence, liquid asset poor.

This doesn’t happen overnight, though. Rather, it can be the culmination of years of not-great-but-not-catastrophic decisions. For that reason, many people don’t even realize they’re in trouble until it’s too late.

To avoid ending up house-poor, keep these four tips in mind when making big purchases.

1. Don’t max out your home-buying budget

Just because you can technically afford a property at the top end of your budget doesn’t mean you should.

It can be easy (especially with a realtor’s convincing) to talk yourself into buying a larger home than you need. There’s potential children to think about, or grandchildren, or home offices, or even the resale value. Unfortunately, the closer you are to that upper limit, the less wiggle room you have financially.

Many first-time home buyers don’t realize the importance of having money on hand for upkeep or the occasional plumbing emergency and instead throw all of their money into a down payment. While that can help you score a lower rate, it leaves you with no safety net and a larger house than you actually need.

2. Don’t depend on the lender’s assessment

When you get pre-approved (something you should do even before you start your house search), your lender will use personal information like income and credit score to set you a lending limit. At this point, it can be easy to assume that the lender has done all the math for you when, in actuality, they don’t take into account things that even a standard budget would.

Major costs like daycare, insurance, gas, or groceries? Just because they’re not factored in doesn’t mean you won’t have them.

When people get a major promotion or pay hike, they tend to spend more on non-essentials instead of putting more into their savings account. There’s nothing wrong with a splurge every once in a while, but by continually upgrading your home or car, you run the risk of being on the hook for high payments even if your salary takes a hit or if you suddenly have other large costs, like college tuition or medical bills.

4. Don’t budget with minimums in mind

Only a part of a minimum payment pays down your actual debt, while the rest covers the interest on the debt carried over from the last month. This is the trap most credit card companies and other debtors want you to fall into—it means more money for them. Instead, you should aim to pay off your credit card balance at the end of each month and leave budgeting room to potentially make extra payments on home and car loans.

But what if it’s too late?

Sure, this is all good advice if you know it going in, but what if you’ve already made some of these mistakes? What do you do when you’re already stuck in the house-poor cycle?

Whatever your specific situation, the bottom line is that you need to free up money so you can either start saving or paying down your larger debts. Here are a few of the best options for doing just that:

Refinance. Depending on when you bought your home and the kind of mortgage you chose, you may be able to cut down on your monthly mortgage payment by refinancing. Interest rates are still fairly low right now, and you can always refinance into a longer term in order to get the financial breathing room needed to pay off other debts. Keep in mind that you’ll probably still have closing costs to pay, though.

Downsize. If you have too much money tied up in a large purchase like a house or a car, the most effective course of action is undoubtedly downsizing. Of course, this may not be practical for everyone. Selling a home can cost money, and if you recently bought yours, you may actually end up losing money. Luckily, there are alternatives. You could rent out the house and move to a smaller apartment, for instance.

Make small cuts. If you’ve made large purchases you shouldn’t have made, odds are pretty good you make a lot of smaller purchases you shouldn’t, either. Four dollar lattes add up, and by cutting out non-essentials, you slowly free up cash that you can put to better use. Remember–just because you have the money doesn’t mean you should spend it.

Make yourself a budget. So much of being house-poor is simply not knowing how much money you have coming in and—more importantly—how much you have going out. Taking the time to lay out all of your finances will let you see where your unnecessary costs are and help you stop wasting money.