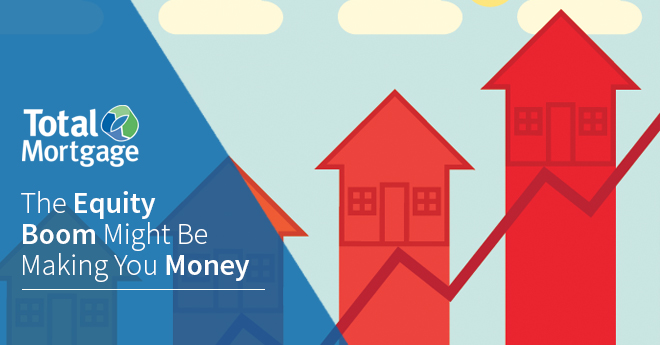 Have you ever checked out your bank account online only to discover you’re $50,000 richer than you were yesterday? That may sound like the sort of thing that happens only in fairy tales and lottery advertisements, but it’s happening right now to millions of homeowners across the nation.

How does it happen?

Homeowner equity is the largest source of wealth for many Americans, and as I speak, an equity boom is underway, raising homes values over the past three years as prices recover from the housing crash.The evidence suggests we’re still in the beginning phases of a boom that is unmatched in modern times. We may not even reach the halfway point for two years or so.

Following the housing crash in 2007, homeowners lost trillions worth of equity in their homes as prices, and then values, plummeted. Falling values pushed millions of homeowners “underwater” or into “negative equity” as their homes became worth less than the amount they owned on their mortgages.  When many homes became virtually worthless, owners defaulted on their loans—sometimes voluntarily. By the end of the Foreclosure Era, more than 5 million homes were lost—about the same number as all the existing homes typically sold in a year.

Is your home still underwater? Many still are. Luckily, the government has programs in place that can help. Learn more about HARP here.

When the recovery began in 2012, the national median home price was at a multi-year low of $154,600 in January of that year. In November 2016, it had reached $220,300 and was still climbing.[1] That’s an increase of 42.2 percent. Sales price trends influence home values over time, so it’s a fair assumption that values are generally following suit and may be increasing much more than 42 percent in hotter Western markets.

Over the past three years, Homes.com has tracked price recovery on a market-by-market basis. By September 2015, 170 of the nation’s largest 300 markets, or 57 percent, had returned to the peak prices they achieved before the housing crash, including 53 of the top 100 markets.[2]

The real estate data and analytics firm CoreLogic estimates that the number of mortgaged residential properties with equity at the end of the third quarter of 2015 reached approximately 46.3 million, or 92.0 percent of all homes with an outstanding mortgage, a decrease of negative-equity homes by 11.8 percent in 12 months. In Q3 2015 there were 37.5 million borrowers with at least 20 percent equity, up 7 percent from 35 million in Q3 2014.[3] Homeowners with 20 percent or more equity will find in easier to sell their homes, refinance or take out loans where their equity provides the collateral.

Price increases are expected to moderate in 2016, causing CoreLogic to move back is forecast for the date when the national median sales price will reach the peak level attained before the housing crash. Initially the firm predicted the peak would be reached in mid-2016; now it is forecasted for mid-2017.[4] The rate of increase in the CoreLogic Home Price Index is expected to slow to 4 to 5 percent during 2016 from about 6 percent in 2015.[5]

These medians, whether market-by-market in the Homes.com reports or CoreLogic’s national medians, represent only a midpoint among homeowners. Even in a market where the median price has reached the peak price half or more than half of homeowners could still below the peak. It will take several more years of price growth for the Equity Boom to fully reach a significant majority of homeowners.

What does this mean for you?

CoreLogic’s data only covers homeowners with a mortgage. If you are one of the 34.4 percent of homeowners who own their homes free and clear[6], the Equity Boom is putting money in your pocket just as quickly as your neighbor with a mortgage—and you don’t have to pay any of it back to a lender when you sell!

In general, those markets that are trailing in the race to regain peak prices lost the most value during the foreclosure crisis and therefore have the longest roads to travel to regain their peak prices. Those where demand is strong and prices are rising fastest are making the most progress to meet and exceed their peak price levels.