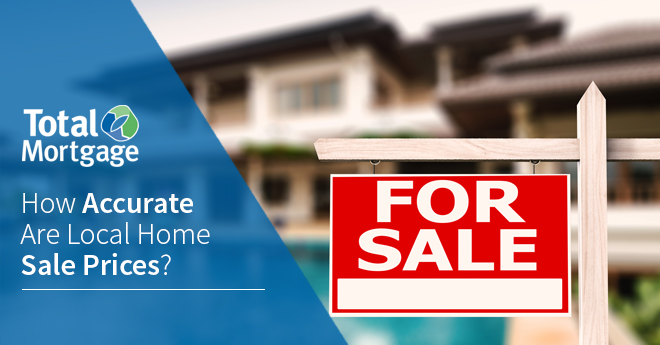 As you search for a home online, one of the more important statistics you’ll encounter are prices for homes that have sold recently in the area you want to live in. This is the best way to get a feel for the local market. In fact, identifying recent sales prices of “comparable” homes is basically how appraisers determine values.

Sales prices, sometime called closed sale prices, differ significantly from list prices, which basically represent only what the seller is asking for the house. Nor are they pending sales process or contract prices, which are the amounts sellers and buyers initially agree to but often change before closing.

Sales prices for individual homes that you see on real estate web sites come from brokers who report prices to their local multiple listing services rather than waiting for prices to be posted publicly at courthouses, a process than can take months.

But How Accurate Are They?

A new study has found that the prices consumers see on web sites were wrong an average of 8.75 percent of the time—in most cases higher than they should have been. The economists who conducted the study looked at 400 transactions in a Southeastern state from 2004 to 2008.

They compared prices from MLSs with the official prices and found that errors weren’t spread evenly over the time period but doubled in one year to more than 15 percent of transactions in 2006, when prices peaked and began to fall in the housing crash, followed by nearly as many errors in 2007 and 2008, when the crash accelerated. One example was 22 percent higher than the actual sales price.

How Do Errors Happen?

The timing of the errors suggested they were not random mistakes but were driven by marketplace conditions.

From the evidence, the authors of the study suggested two viable explanations for the market-driven error rates. The first was that some brokers intentionally inflated sold price information in the MLS, perhaps to make it appear that they negotiated a higher price for their clients.

“I don’t think agents were deliberately misstating prices, though that’s a story that fits the facts,” said Dr. Kenneth M. Lusht, one of the study’s three authors, in an interview. Lusht is Distinguished Professor of Real Estate at Florida Gulf Coast University.

“The second thing that could have happened, and it’s pretty likely, is that when you’ve got a down market, buyers get cold feet. They start thinking about not going through with the sale and giving up their deposit. So another story that’s consistent with what we found is that the price the broker submitted was the agreed upon price but between that the time he submitted it to the MLS and the settlement day the price was changed and the broker never changed the data because there is no incentive to do so.”

Whatever the cause of the errors, the study concluded, “Regardless of the motivation or source of the error, the result is the same—a misstated price.”

More research is needed to confirm whether a real problem might exist and to measure its scope. Moreover, few markets today are falling at rates close to those of the period covered by the study, so at most errors are less frequent and less severe than those in the study.

However, in the meantime consumers relying upon sales data originating from multiple listings services should see if they can find other sources for sales that they are relying upon to set a sales price, price an offer or negotiate and final price.