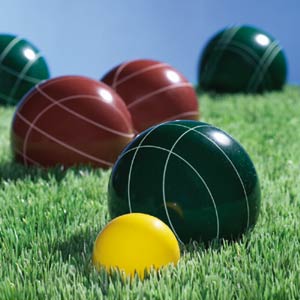 As the weather warms up, we all want to be outside more. My favorite way to spend time outside is by playing some casual lawn games. Whether you’re going to the beach, having a large gathering at your house, or just hanging out in the back yard with a few friends, these games are sure to keep people entertained. So crack open a cold one and let’s play some games!

Bocce is the classic backyard game of accuracy and touch. The team that gets to go first tosses the jack (little, target ball) then throws their first ball. The opposing team then throws one ball at a time until one of their balls is closer than the opponent’s toss (or until they run out of balls). At that point, the first team gets to throw their balls one at a time and the process repeats. After all the balls have been thrown, the team with the closest ball to the jack gets a point. If the same team has multiple balls that are closer to the jack than their opponent, they will be awarded extra points accordingly. 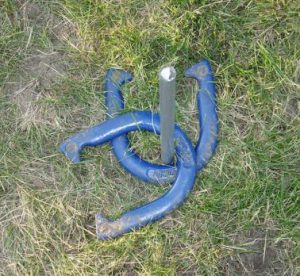 Horseshoes may be the most well-known lawn game on the list. Set up two stakes 20-37 feet apart and stand across from your partner. The two opponents at one end will pitch their four shoes. The opponents at the other end will tally the points then throw their shoes back the other way. Any shoe that comes within 6” of the stake is valued at 1 point, and any shoe wrapped around the stake is valued at 3 points.

Test your Frisbee accuracy and deflection skills with Kan Jam. Partners stand across from each other and one of them throws the Frisbee at or near the kan. The partner is responsible for redirecting any missed shots to either hit or go in the kan. Scoring is shown in the graphic. If you don’t have a Kan Jam set, you can use large tubs or garbage cans with a Frisbee.

Cornhole is also played across from your partner, but uses beanbags and a cornhole board instead of Frisbees and kans. After team has thrown their four bags, you total up the points and compare the teams’ points. If one team scored more than the other that round, they get that amount of points added to their total score (3 points to 5 points will give the higher scoring team 2 points). You get 1 point for a bag that stays on the board and 3 points if you make it in the hole. Play to 21.

If you’ve never heard of ladderball, don’t worry. Ladderball is a new addition to the yard game community, but is rapidly gaining popularity. The goal is to wrap your “bola” around the rungs of the ladder. Points are tallied after each team has thrown all their bolas, and are awarded in ascending fashion – bottom rung = 1 point, middle rung = 2 points, top rung = 3 points. First team to 21 points wins.

What’s your favorite lawn game? Let us know in the comments section below!